IBC is the largest broadcasting equipment exhibition in Europe and considered one of international 3 big shows participating more than 55 thousands specialists from 170 countries every year. IBC breaks attendance record each year introducing new technologies and products with providing prestigious conferences, and sets trends in business networking, broadcasting and media. Hyundai Fomex Co., Ltd. participated in IBC 2016 and drew the interest from buyers and visitors by presenting LED light as last year.

‘FLEXIBLE LED FL1200’ is a newly introduced product at IBC 2016 which is characterized by enhanced light intensity and color temperature up to 2 times compared to their previous model ‘FLEXIBLE LED FL600’. Based on powerful output and delicate light diffusing options, it has dramatically increased the color temperature to 6500K and the luminous intensity to 4000lux while maintaining the identity of a product that is easy to deform freely.

“We expect that 'FLEXIBLE LED FL1200' as the sequel to their ‘FLEXIBLE LED 600’ which was selected as one of the 'Top 100 Asian Brands' by the world's leading exhibitions in 2015 will become a hit product during IBC 2016.” said by Fomex officials in Amsterdam.

Meanwhile, the EX Panel Light EX600P, EX1200P, and EX1800P models which made their debut on the overseas stage continued to promote. The EX Panel Light Series, which is optimized for professional broadcasts such as outdoor locations with a solid body made of aluminum, has renewed its existing design to meet the European people's attention, aiming at productive as well as aesthetic satisfaction.

In addition, the MINI EX series has greatly expanded the range of user selection for shooting purposes. It is a mini sized new product released in the development trend of LED products with high light intensity. With this new product, it is possible to perfectly cover the situation where the size of the subject is extremely small or the shooting place is extremely narrow so that it made higher distinguishability of displayed product of Fomex (EX48, EX64, EX80 & EX96).

Jayson Yoo, CEO of Hyundai Fomex Co., Ltd. announced that Convergences and Integrations between technology and technology, and technology and design are considered as a core process all over the world that cannot be overlooked. By attending IBC 2016, Fomex will have an impact on differentiated competitiveness in LED light industry and put effort to be a leader in broadcasting technology of next generation producing tangible achievement that is expanding export markets. 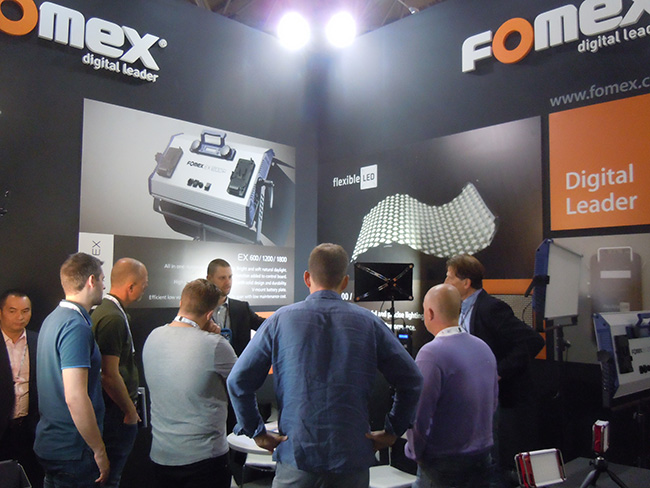